As in days of old, when visitors to a Hawaiian home were greeted and invited in, we welcome you to walk along the Kauhale Heritage Trail. Come, be welcomed, and learn the history of this storied landscape.

The Kauhale Heritage Trail was developed under the guidance of the late Arline Wainaha Ku‘uleialoha Brede Eaton (1927–2013). Kupuna Eaton was a life-long resident of Pu‘uloa and a founding member of Hoakalei Cultural Foundation.

Along the 1/4 mile trail you'll see evidence of traditional Hawaiian life on the coastal plain of Honouliuli. Preserved here are platforms, enclosures, mounds, walls, and alignments created by the people who used this place and called it home. You will also see plants that once thrived along this coast and that would have been found in and around traditional Hawaiian coastal settlements.

The word kauhale means “group of houses.” It refers to the Hawaiian custom of building several structures for each home. The number of houses varied; a home near the shore here might include separate eating houses for men and women, a sleeping house, a cookhouse, and a canoe house.

The families who built kauhale here specialized in the ways of the lawai‘a fisher folk. They used locally available pōhaku puna (coral cobbles and slabs) to build house foundations, and they cultivated useful plants in shallow pockets of soil. It is believed that settlements along this coastline were used seasonally over successive generations by members of extended families. 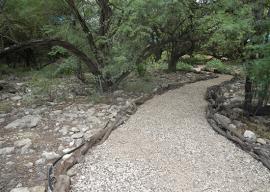 In ancient times the Hawaiian people first settled along sheltered bays and coves where streams and water flowed. The mouths of the valleys around Pu‘uloa, today called Pearl Harbor, were prime settlement areas. Over time, as the culture flourished and population grew, people moved into more marginal lands, such as this kula, or plain, of Honouliuli. They came to the coast here to fish, to gather shellfish and limu, and perhaps to make salt at the wetland. The Honouliuli coastline was bountiful. Kupuna Eaton recalled growing up near here in the early 1930s. “We would walk from Pu‘uloa to the shore at Keone‘ula, and then on to Kualaka‘i, and along the way we would gather limu (sea-weed). There was limu kohu, līpoa, and ‘ele‘ele. The fish were so plentiful, not like now. We would catch ‘ō‘io, kala, weke, moana, ‘ū‘ū, and all kinds of fish. It was a good place.” 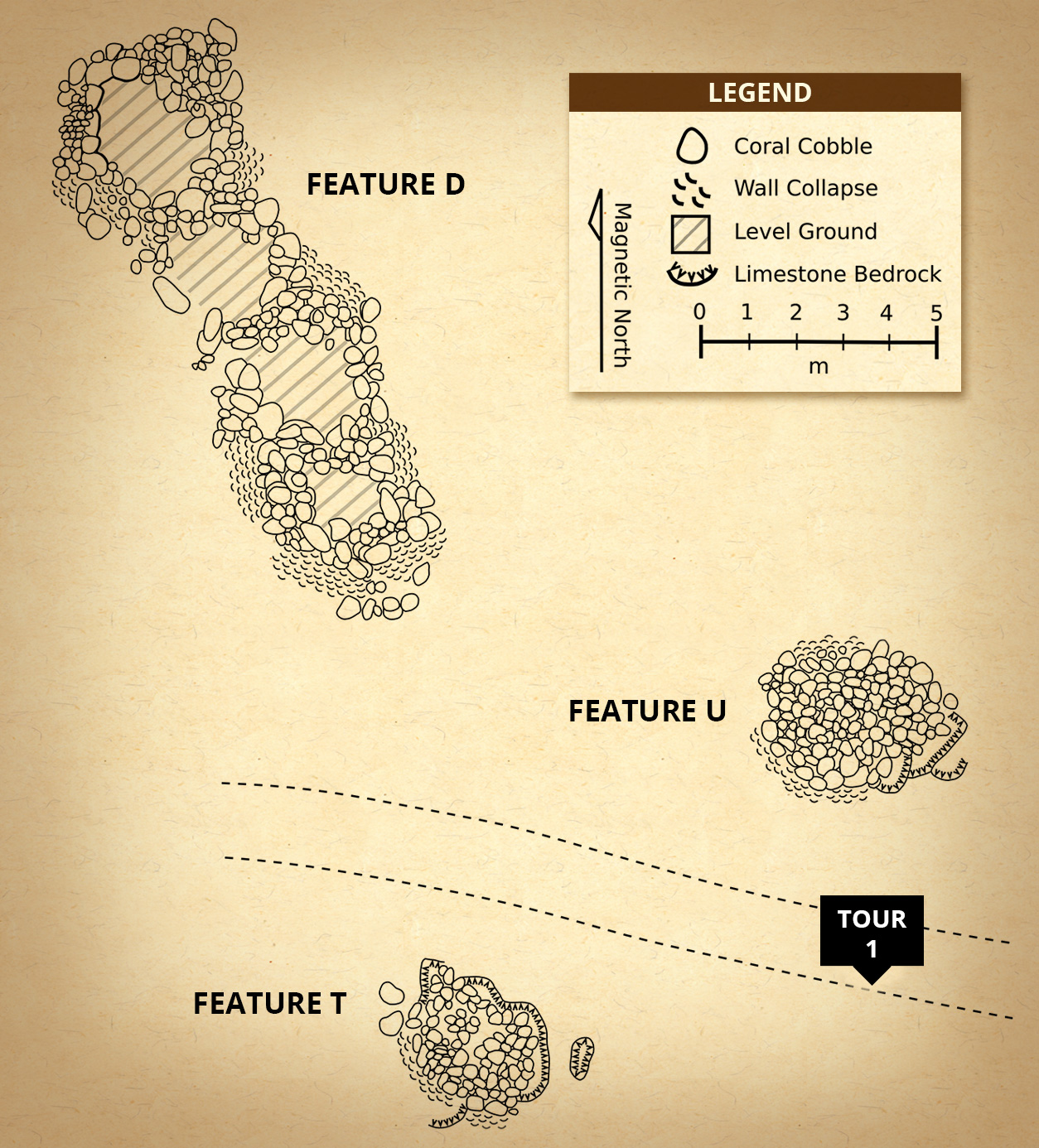 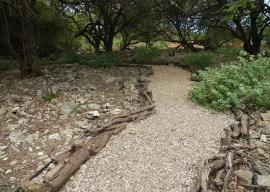 The traditional Hawaiian settlement here was used seasonally over successive generations by members of extended families. These people sustained themselves from the bounty of the land and sea. They exchanged coastal resources such as fish, shellfish, seaweeds, and sea salt with those who dwelt inland and tended agricultural fields. This was the way of life for many generations. Places were named and some of them—storied and sacred locations called wahi pana— were celebrated by traditions that were passed from one generation to the next. As those who wrote some of the earliest native accounts of life at Pu‘uloa put it, mai kāhi piko a kāhi piko! The remains of this kauhale consist of two platforms and enclosed areas. A small cupboard is located in one of the platforms and may have been used for food storage. Here, as elsewhere, the Hawaiian people knew their environment. They learned to live well within the boundaries of the wealth and limitations of the resources it offered. 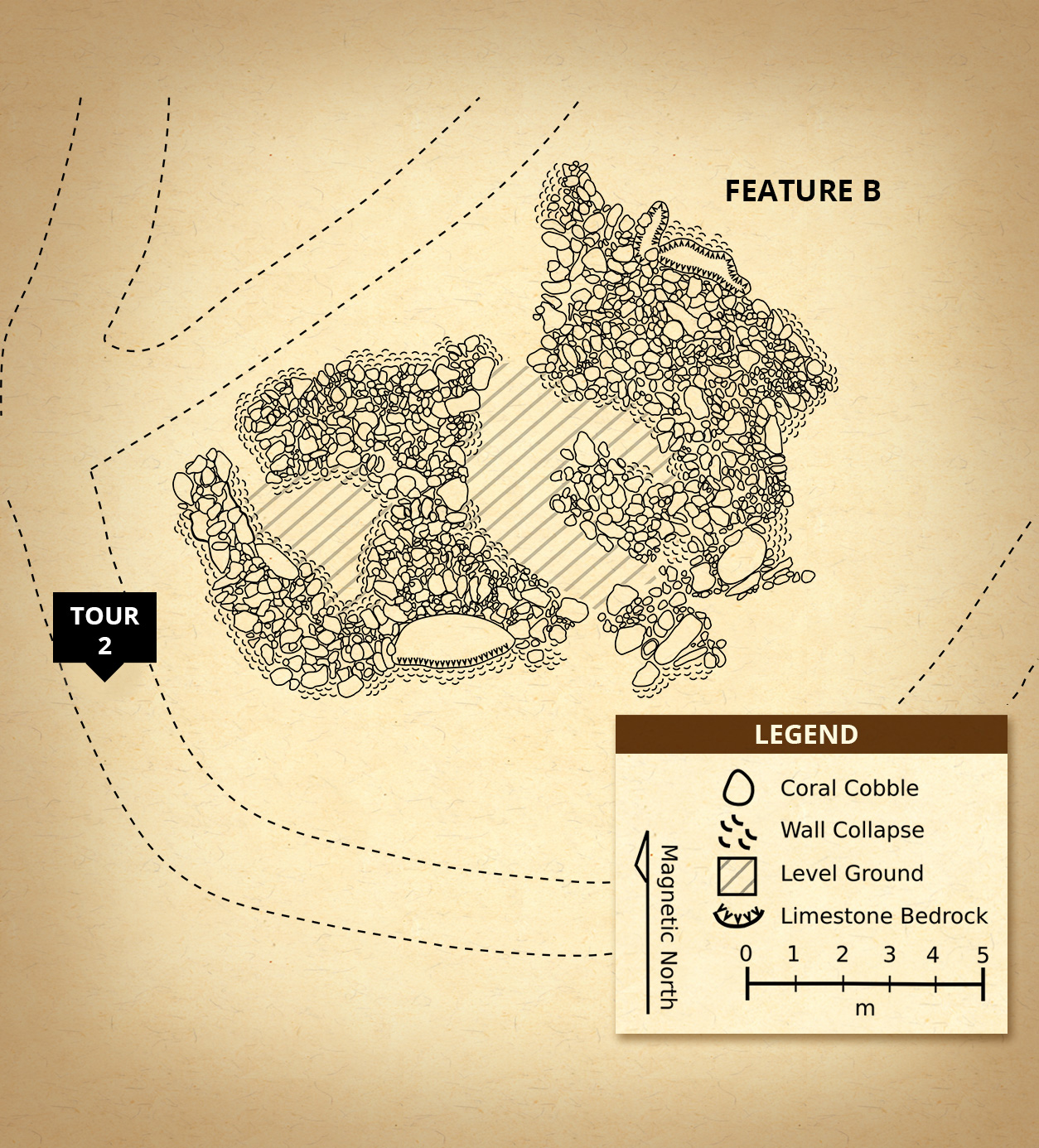 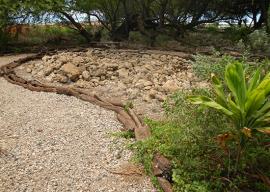 Here is another seasonal kauhale, consisting of a platform with an attached enclosure. Artifacts were recovered here and from the small platform to the west by archaeologists in the 1980s. The artifacts include pieces of bone and shell fishhooks, a basalt adze, coral abraders, and glass bottle fragments. This kauhale was probably built in traditional Hawaiian times and then abandoned sometime in the early historic era. By the time Kupuna Eaton played in the wetland nearby as a child in the early 1930s no one was living full time out between Keone‘ula and Kualaka‘i. There were families that would come out for several months at a time “… and set up temporary residence on the beach,” but no one lived at sites near the Kauhale Heritage Trail. According to Kupuna Eaton, “there was not much activity in the area behind the shore.” The pole and thatch structures built over the platforms are now gone. They were probably covered with pili grass, a thatching that added a pleasant odor to a new hale. When in use, the surface of the rock platforms was smoother. It would have been covered with layers of coarse and fine mats to create a comfortable living space. 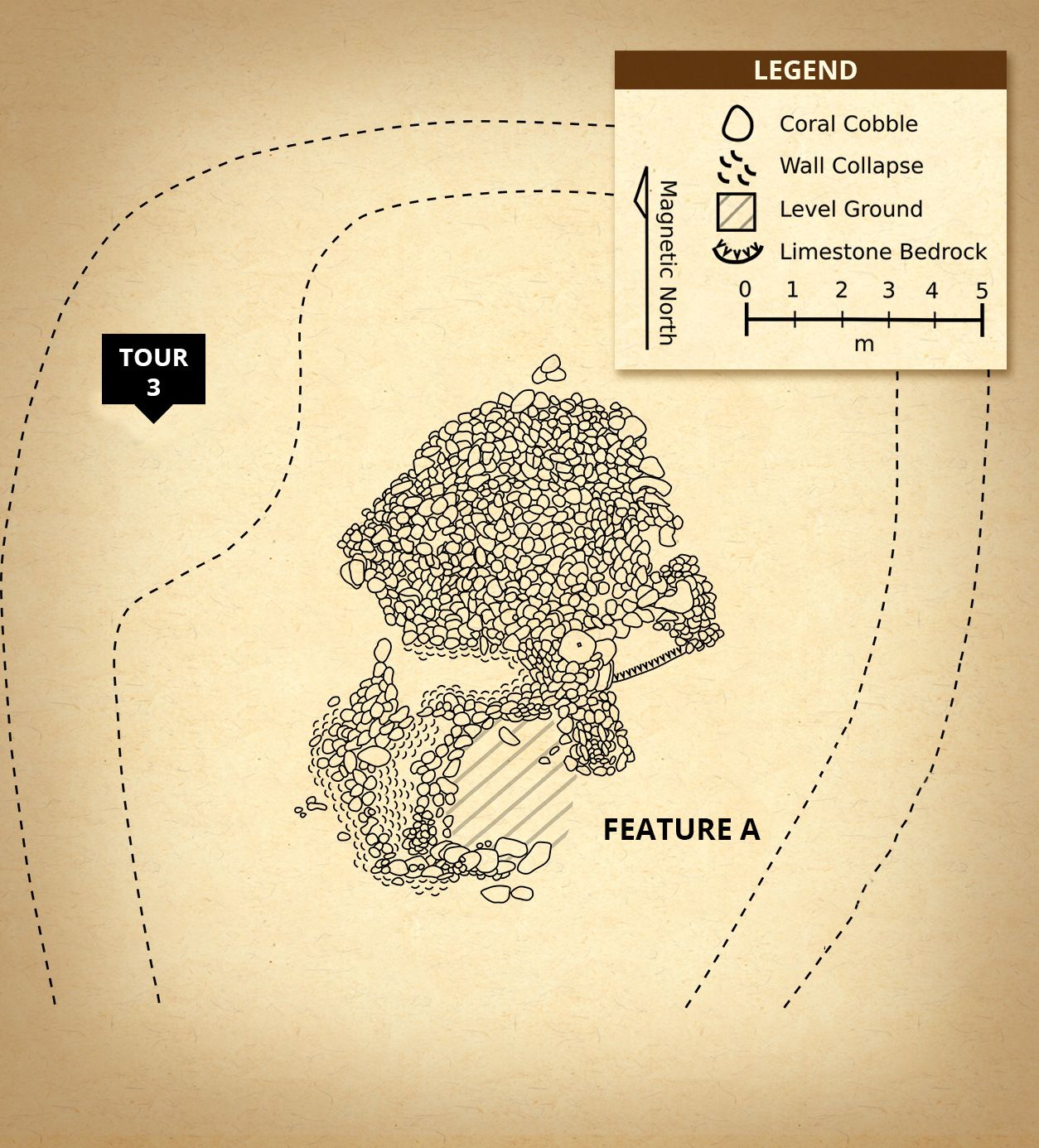 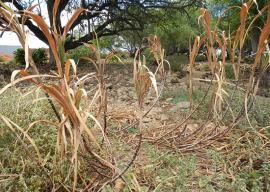 Honouliuli is the hottest and driest region of O‘ahu. Nevertheless, the people of the land were able to cultivate plants and find good water to drink. This open area contains low-lying mounds and rock alignments typical of rain-fed agricultural sites, where plants such as ‘uala (sweet potatoes), ipu/hue (gourds), kō (sugarcane), and hala (pandanus) important for sustaining traditional life would have been grown. The rocks in the low-lying agricultural mounds functioned to protect small pockets of soil from the sun. The shade they provided preserved moisture and kept soil temperatures within the range favored by plants. In this way, kitchen gardens could supplement the vegetable foods brought here from the main gardens situated inland near the base of the Wai‘anae mountains. The landscape you see today is quite different from when Hawaiians lived here in traditional style. Back then, fresh water was found in po‘opo‘o (sink holes) and kula ālialia (wetlands). Drinking water often came from the ocean. Kupuna Eaton grew up drinking this wai kai. In an interview, she explained: “You can tell that there’s water there along the shore, you can see it bubbling up, and the limu ‘ele‘ele will only grow where there is fresh water coming out of the papa (reef flats).” When Kupuna Eaton was older she took bottles of wai kai to school because she preferred it to the tasteless municipal water. 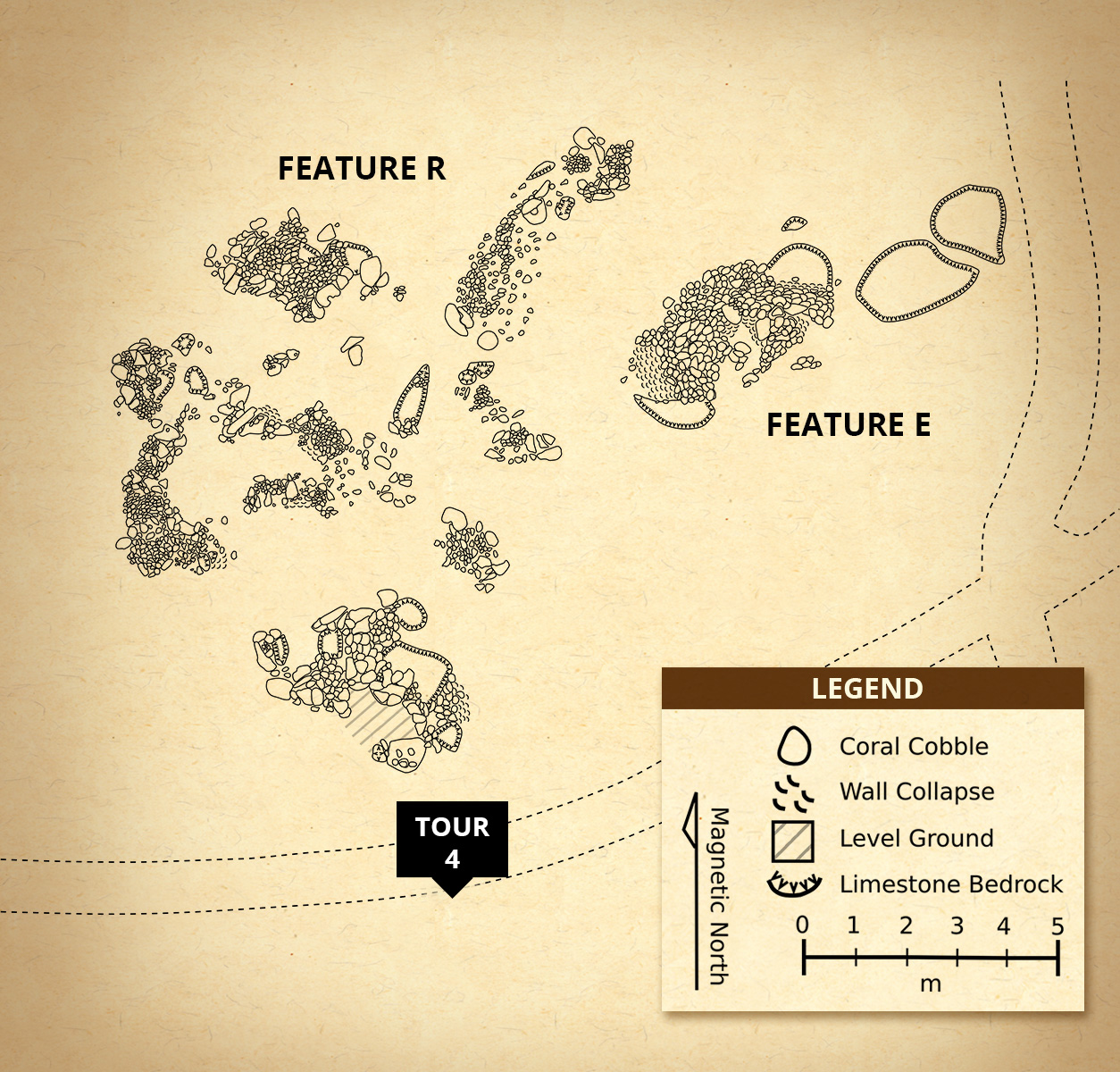 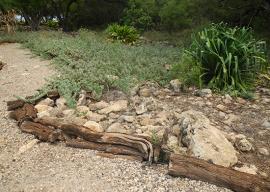 This platform and enclosure are the foundation of a sleeping house. The stones of these structures, like other structures along the Kauhale Heritage Trail, have been displaced and jumbled since the site was abandoned in the 1800s. For about a century, this area was used to pasture cattle from Dowsett Ranch. For a time in the mid nineteenth century, cattle were pastured throughout Honouliuli, from the coast here up into the mountains. Kupuna Eaton played near here as a child in the 1930s when her father managed Dowsett Ranch lands. The sugar cane fields established throughout ‘Ewa at the end of the nineteenth century never came this close to the coast. The nearest cane fields were about a quarter mile inland. During World War II this area was on the outskirts of the Barbers Point Naval Air Station. It was occasionally used by the military at that time. When the sites were first recorded by archaeologists in the 1980s, they found military communications wire around and on top of several traditional Hawaiian structures.

Kupuna Arline Eaton, What it means to be Hawaiian