Ka‘ahupāhau is the shark goddess of Pearl Harbor who guarded the people from being molested by the sharks. Her work is still in the minds of Hawaiians today. She moved about, constantly watching. Hawaiians use this saying to describe a person who goes everywhere and sees everything, or a person familiar with every nook and corner of a place.

Aloha.
Hoakalei Cultural Foundation welcomes you to the Kuapapa Preserve. The Kuapapa Preserve is maintained so you can become familiar with this nook and corner of Honouliuli history.
The preserve contains landscape features from three periods of Hawaiian history.
The oldest features are the remains of traditional Hawaiian habitation sites. They were built and maintained by generations of farmers and fishers who used them while they gathered seaweed (limu), caught migratory birds, collected shellfish, and fished for o‘opu, manini, and āholehole, among others.
During World War II, the US military made use of the lands around Pearl Harbor, including this land. The long, low pile of coral rock at one side of the preserve was probably pushed up by a bulldozer during World War II.
Most recently, a corner of the preserve was used as a piggery. Remnants of concrete foundations and construction materials are clearly visible today. 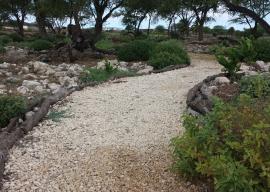 "The fish of ‛Ewa that silences the voice"

This famous saying of ‛Ewa is associated with the goddess Kānekua‛ana. It was to her that the heiau waihau temples were established along the Pu‛uloa lochs to ensure the abundance of various fisheries, and particularly the pipi, nahawele, mahamoe, and other clams and oysters for which ‛Ewa's inland fisheries were famed. Among the kapu of Kānekua‛ana was that fisherfolk needed to be very quiet when going to sea to gather the shellfish. The slightest voice would cause the wind to blow, and this would cause the shellfish to sink deep into the sands where they would be difficult to find.

The Native Hawaiians who built the four stone structures preserved in this part of Kuapapa Preserve probably inhabited them seasonally. The skill and energy invested in construction indicates they returned here repeatedly, probably for generations. The two C-shaped walls served as the foundations for shelters. The rectangular enclosure likely supported a more substantial house thatched with pili grass. The low wall around the top of the sinkhole restricts access to this natural limestone feature. 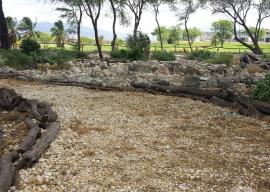 "‘Ewa, land of the sea reddened by earth"

‘Ewa was once noted for being dusty, and its sea was reddened by mud in time of rain. One‘ula Beach Park nearby got its name this way. One‘ula means "red sand."

The Native Hawaiians who lived in this ﬁne example of a kauhale used separate structures for sleeping, eating, and cooking. They carried local cobbles and boulders to this site and tightly stacked them to create four platforms and two enclosures. The platforms have paved surfaces on top and the enclosures have open activity areas inside their walls. This kauhale likely was still being used yearly in the early 1800s by families who came to the coast to catch birds, ﬁsh, and gather marine and wetland resources.

Beyond are the concrete foundation remnants of a piggery that was in operation during the second half of the 20th century. Ku‘uwainani Eaton, president of Hoakalei Cultural Foundation, learned about the piggery here from her grandmother, Arline Eaton.

“My grandmother said that this was a place where pigs were raised in the years between the 1950s to 1970s. Hawaiians and Japanese were the people who cared for the pigs on the coastal lowlands of Honouliuli.”

Behind you is a long stone mound pushed up by a bulldozer, probably during World War II.